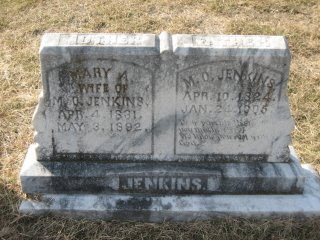 Michael Oliver Jenkins is my 3rd great grandfather. I have been searching for his family for more than four years. As in the case of my gg grandfather William Woolsey, it's as though he life also does not start until he married. I often expect to encounter this hurdle with my female ancestors, but I seem to be encountering this with my male ancestors quit often. So in order to break down this brick wall, I sat down and wrote out his Biographical Outline as I know it.

Biographical Outline of the Life of M.O. Jenkins
Records I have:
Future research:
Posted by Untangled Family Roots at 4:06 PM

If your Michael Jenkins was like my ggf after his wife died, he made the rounds of grown children for weeks or months at a time. He also could've gone to live with one in Okla and died at their home. Surely an obit was published wherever he was living at the time.

If the body was brought to TX from out of state, the cemetery may have a record of where it came from.

I do find it strange, however, that he doesn't appear in the 1900 census in TX or OK under any spelling using the search tricks I know.

I do believe you may be right. At least that's what I had suspected as well. I'm still looking, especially for the daughters, during the 1900 census.

I have seen his name misspelled, so I expect that is the problem in finding him in 1900 because I know he didn't die until 1905.

I do need to check with the cemetery. I think I will do that next. Thanks for your tips!

I have no idea of the relevance of this, but in doing genealogy research for our common ancestor, Michael Oliver Jenkins, I came across this story on ancestry.com. It may explain why you have had such trouble finding out more information about Michael Oliver, or it may be completely false. Thought I would pass it along and let you see if it helps you.

Patrick Henry Moring (John's father), after getting out of jail for mule stealing, left his wife and 6 kids. He remarried, moved "down by the
river" and raised another large family.

John Bell Moring married the daughter of the wagonmaster of a passing oxen train in Tennessee, hopped aboard, and ended up in Texas. There may be some letters from JBM while he was in Yankee war prison.

The mother of the ox train driver, Michael Oliver Jenkins, was an Indian who had been raped by a white man. "Black Dutch" was a euphemism for mixed blood."

I found you post today, 1/5/10. Please contact me, as I have the family MO came from. I also have a will of his uncle (father?) and his grandfatherm Joseph Jenkins, and other related information. I come through John Stephens Jenkins, MO's son. My grandmother is Edith Price Jenkins. I live in Idaho too. Please contact me, I'm old, and the computer is not my best friend, so I might need a little help. By the way, was Jewel Dial your grandmother? I think she was from what you said. I have all of her research! Bettyar

Buzz I would sure love to chat with you! Unfortunately you left no way for me to contact you. Please write back with a way to get in touch. I can't believe you live here in Idaho and you may have the missing links I'm looking for.

I had planned to send off for MO or Mary's wills (I did find an abstract of her probate)when I had the money, but I've not been able to.

I am descended through John Stevens son, John Hugh, who's daughter Oliva Joyce Jenkins was my grandmother.

I look forward to hearing from you.

please email me at buzz@fitzfamily.info. The information I have had taken 40 years to gather, and I am in the process of gathering more. Buzz is my husband, and I am Betty Ann Renshaw Roach grand-daughter of Edith Price Jenkins and Harrison Burton Renshaw. Uncle Hugh, as I new him was my grandmother's brother. I have pictures of him, also his parents and of MO and Mary. Let me hear from you.

Hi! I know that you posted this a while back, but I recently found your blog. The story that Mark and Ket listed is from my Ancestry family tree. I got that story from a relative (I believe it was John Morning, but would have to check) I'd like to get in touch with you. My e-mail is townwlfhwk@aol.com

My great grandmother was Levina Elizabeth Jenkins. MO and Mary were my 2nd great grandparents. MO was raised by his aunt Margaret Jenkins daughter of Joseph. Back then as far as the law was concerned your mother determined if you were Native American or White. So they hid his records or destroyed them so he would not be sent to a reservation. My name is Susan Bentley-Johnston nee Napier. My mother Hope Elaine Napier nee Gartman was Levinas granddaughter. Her mother was Wrena Jo Gartman nee Lindsay. joseph Cone(not cane) Lindsay was Levinas husband