Often times we have pictures that we love for one reason or another, but at the same time hate for another. What do you do? Change it.

Case in point. Recently, the company I am a receptionist for had a group photo done. We wanted an outdoor photo of the group, but there wasn't a perfect location for that, so our wonderful photographer at The Big Picture found the best possible location, while knowing that the background could be altered if need be. In our case, we ended up with a washed out parking lot on one side of the background, but when I was done with it, there was a beautiful background full of nature and color with just the right amount of light. 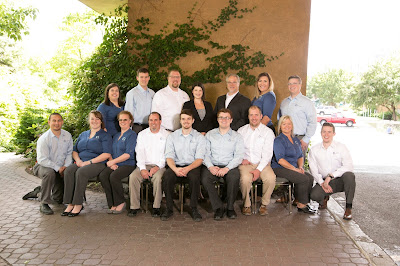 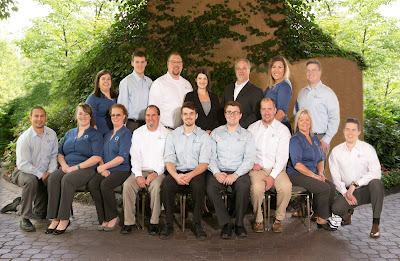 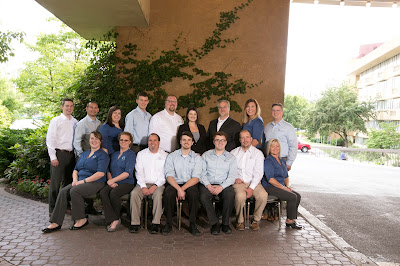 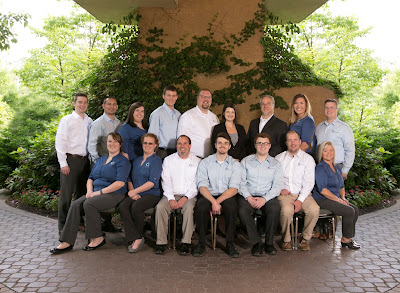 I currently working on another photo taken of a bride by her relatives. Though she liked the photo of herself the door in the background screams amateur photographer and is distracting. She wants to have the photo blown up to wall size and hang on her wall. Plus she wanted her skin tone evened out. The lighting in the room made her look blotchy. With a little clean up of her skin and a completely new background that makes it appear that her photo was taken in a professional studio, she will have an image ready to blow up and hang on her wall.

There are many times when the perfect action or the perfect smile are captured, but something in the background is very distracting or in some way steals away from the beauty of the photo. We don't have to put up with that anymore. It can be changed!

The value of Alien Cases Files

It's been a rough year watching a dear friend of my husband's suffer and succumb to his fate of cancer. After his death, his wife asked me to do some research on his family. Many of his family heirlooms that he has kept and stored over the years, such as a car his mother drove and a horse drawn carriage his grandparents were married in, and other farm implements will be displayed in various locations, but primarily in a museum that we hope to see open in Hayden. The curator is currently looking for an ideal venue. Anyway, his wife asked me to do the research in order to compile the family history to add provenance to the items when they go on display.

Gary Rowles 1951-2016 was the son of Sidney Rowles and Clara Marie Neustel. Gary knew his mother and her family. He even grew very fond of and loved his step-father, Victor Ferdinand Wycoff, dearly, but sadly did not know his father Sidney Rowles very well. Gary's wife was curious about Sid, which sparked a curiosity in me to find out more about this man. What was known about Sid is that he was from Wales, but little else was known about him, beyond his marriage and ultimate birth of two sons in Coeur d'Alene, ID.

As with every genealogy project I undertake, I started with the latest generation, Gary, and worked my way back. Gary's mother's line quickly expanded into a full grown tree with many documents that were easy to find. It's rarely difficult to compile a tree on a family when they remain in one location for generations and establish themselves as part of the community.

Gary's father on the other hand would prove to be almost as elusive in documents as he was to his son. I did the usual research of census, birth, death, marriage and other common records often found on sites like familysearch.org and ancestry.com.

I found Sidney's death index in nearby Spokane, WA. Which was surprising considering he lived and (we thought) died in Coeur d'Alene, ID. Another lesson in the importance of considering neighboring counties and states when searching for elusive ancestors. Spokane is a big city compared to Coeur d'Alene, and even more so back in 1965. It's very likely Sid had a long term illness that took him to the large hospital in Spokane where he then passed. Unfortunately the index didn't tell me much other than his death date and location. I'll work on obtaining a death certificate later.

I continued to dig until I came across an index for another set of records I wasn't very familiar with, the Alien Cases Files archived in Kansas City. This time I read more of the details below the index information. Since the index only gave me name, birth and country of birth I still didn't have much. Below the index was a bit more information on the index, but still just source information. Then I seen the link that said "learn more". When I clicked on the link I went to a search screen for the index, but I kept scrolling, and to my surprise I found an email where I could send off for the records I had found in the index for Sidney Rowles.

I emailed Afiles.KansasCity@nara.gov right then and anxiously awaited their response. I was so excited to open the response the next morning. After a few emails I had paid $20 for the entire packet and received it that day via email in a PDF file. Talk about exciting! In the packet was a photo of Sid, boy did Gary look like his father. Digging deeper through the file also revealed his parent's names as well as a copy of his father's naturalization record!

Armed with the new information I was able to find his parents in Pennsylvania and slowly piece together the story of Sidney Rowles. Sidney was born 27 Sept 1903 in Aberdare, South Wales, Great Britain to James Farmer Rowles and Elizabeth Ann Lewis. At the age of eight he left from Liverpool England on the Baltic with his mother to join his father who had already come to America in 1910. They settled in Lackawana, PA as evidenced in the 1920 census. His mother passed away on 17 Mar 1930 in Scranton, PA. As of yet I have been unable to find a death record of any kind for his father and his paper trail goes cold after Elizabeth's death. Shortly after Elizabeth's death, Sid left PA and by 1935 had settled in Rimrock, ID where he would start a family.

The Rowles family story ends here for now. Now the challenge will be to research Walsh records. I have found them in census records for England, but nothing more.
Posted by Untangled Family Roots at 9:50 AM 2 comments:

It's time to finally time to create a website and start putting myself out there as a restoration artist. I've always enjoyed restoring photos to their original beauty. On top of that, my passion for genealogy and writing can all come together in one place. I'll add more services to my website for genealogy research and digital scrapbooking. I'm still perfecting those service details and will add them soon. Basically, my idea is a one-stop shop for anyone looking to preserve and compile the stories of their ancestry.

Photo restoration and a mystery

I've done a few wonderful photo restorations this week. One was using two different photos of a building and scenery to restore a building to its original beauty. The other photo was an absolutely destroyed wedding photo. Both turned out amazing. 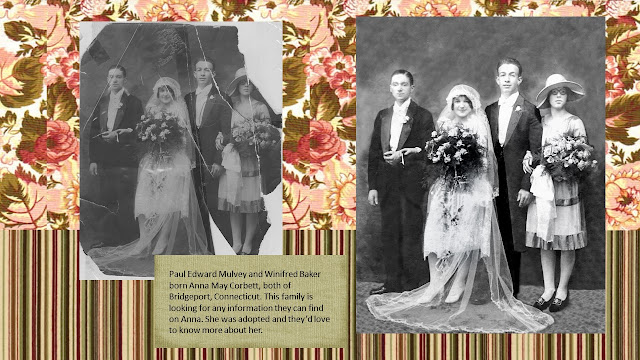 This lovely photo comes with a little mystery as the caption states. The bride Winifred Baker was born Anna May Corbett in Bridgeport, CT. The family has been searching for years for her roots with no such luck. Maybe one of my genealogy buddies will see this and know who Anna was and where she came from. 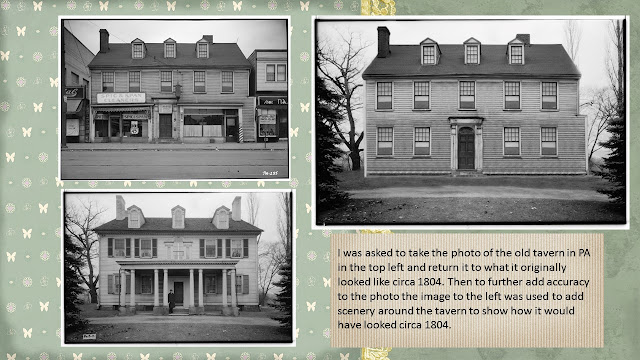 This photo was a lot of fun! First the customer wanted the storefront returned to its original grandeur of the early 1800's According to his research the building was a tavern around 1804. It was later turned into a store front, which is what you see in the photo in the top left which was taken in 1938. The building was then demolished in the '70's. As part of my customer's research, he wanted a photo of the building that would appear as it did in 1804. With his input from his research, I was able to recreate the front of the building and then with using a period photo from the area I was able to place the building into it's surrounding area. Viola! We have the old tavern in PA circa 1804 on the right. According to the research, if the building were still standing it would be one of the oldest buildings in PA. Research and original photos provided by Mark Jaskolka. Thank you, Mark for a wonderful opportunity to show my skills.

Posted by Untangled Family Roots at 8:45 PM No comments: