Wordless Wednesday: Can you ID them?

Jean Carpenter and I have been trying to Identify everyone in this top photo. Hear is what we do know. The elderly woman in the center is Martha "Ellen" (McCombs) Hoard. We believe that this photo was taken in the 1940's. Ellen died in 1946 so it had to be before that. We also knew the woman on the far right to be Pearl. Then I went back to some of my known photographs to help me identify the others. From the photos below we can deduce that the man in the back, far right is probably Roy. His name is also written on the bottom of the photo, so I'm sure he is in the photo. Then based on my deduction of the photos below taken in 1961 of Ellen's children I believe the man on the far left to be Oscar. I also think that is the name someone tried to write on the bottom of the photo. It looks more like Osker, but was likely meant to be Oscar. Then the young man in the back, second from the left I believe is J.Y Gailey, one of Pearl's son's. Pearl also had a set of twins, Johnnie and Donnie. The young boy in the front looks a lot like J.Y and is likely to be one of the twins. The only other one that I can not really say for sure is the oldest looking gentleman in the back next to Roy. He looks to old to me to be Oscar and Roy's brother, Ernest. However this could also be their oldest brother George. I have no photos of George so I don't know what he looks like. Then the other tricky ID would be the young lady in the front. At first I thought this was Mary Celestia (Aunt Perky), but now I'm thinking this was my grandmother, Mary Ellen Hayes. Here is why; I believe this photo was likely taken not long before Ellen's death. She appears to be in poor health here. Her eyes are more sunken then in any other photo I've seen of her. If this was taken around 1945-46 my grandmother would have been about 14-15 years old. Aunt Perky would have been nearly 40, and Mary's mother, Lillie would have been around 36, so I know that girl has to be a granddaughter of Ellen. If you compare that to the photo of Mary Ellen Hayes taken when she was 15, it really looks like her. 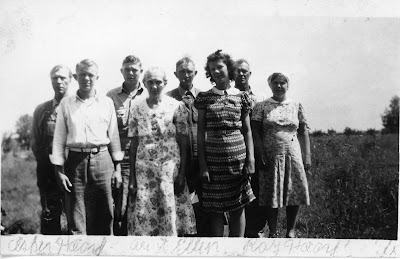 This photo was given to me by a cousin, Dave McCombs a couple years ago, and I've been trying to figure out who everyone is every since, but after gathering all the these other photos from my Aunts I was able to make better conclusions on my identities then before. I've also gotten help from my mom to identify some of them. 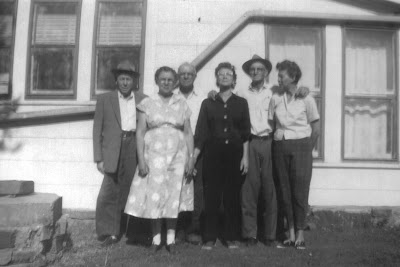 This photo was taken in 1961. The women L to R are Pearl, Mary Celestia or Aunt Perky as we called her, and Lillie (my great grandmother). The men we weren't sure of the order at first, but after looking at other photographs I believe it is L to R: Oscar, Roy and Ernest. Roy I know is in the center and I really believe that Ernest is the one with his arms around the girls on the right based on the photograph at the bottom. 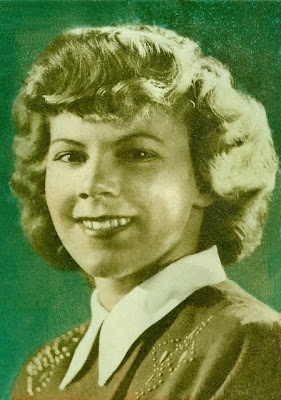 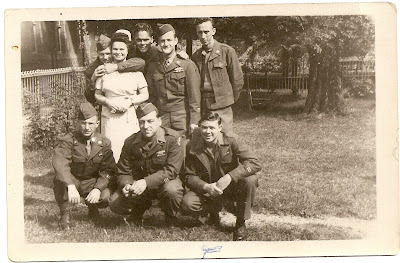 This one was used to help identify one of the young men in the top photo. This was a known photo of J.Y. Gailey (bottom right) and his army friends. None of them are identified, but this was possibly WWII, so early 40's. He looks to be about the same age in the top photo. 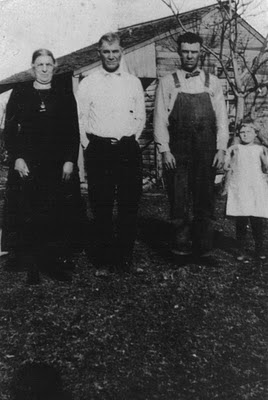 This one is a four generation photo of Emily Lutitia (Scott) Hoard, her son Thomas Hoard (the husband of Ellen above), his son Roy and Roy's daughter Fontana. 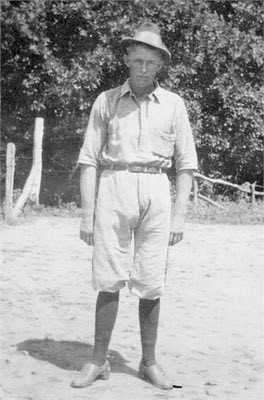 This was a known photo of Ernest Hoard.
Posted by Untangled Family Roots at 9:47 AM 2 comments: