In Life Just a Girl, In Death a Tragedy

Her death was written about in papers all over the west. Even as far south as Texas. 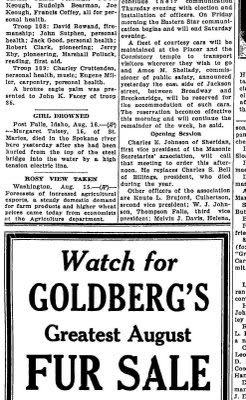 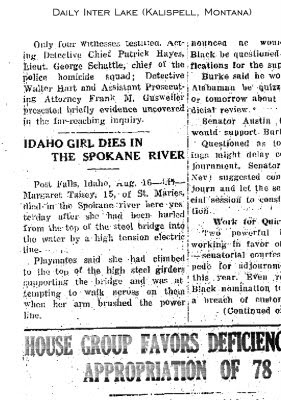 The article was always the same in every paper. It must have been a shock to the country in those days to hear about a 15 year old girl being electrocuted by a high wire which caused her to fall to her death in the Spokane River.
Margaret also known by her family and friends as Muggins was born 28 Feb 1922 in Hauser, Kootenai County, Idaho to Paul Walter Taisey and Irene Jane (White) Taisey.

She lived in a tent with her parents and nine (of the later 13) siblings until 1935, when they moved to St Maries. There they lived in a two story home on 4th St that they rented from Mr. Wandulich.

Her father, Paul was a logger by trade. Some of his family lived in Spokane, WA. He did the best he could for his large family, I'm sure, but when Margaret died a sudden death they were unable to pay for her burial. This is how she ended up to be buried in the Pauper's Cemetery. She lies in an unmarked grave under the the pine trees.

The more I write about the lives of those buried here I find it very heart breaking to think that these people were treated with prejudice because they nor their loved ones, if they had any, could afford their burial.

Dear readers, I need to take a break until the end of the month. I am still doing research on the interned at the Paupers Cemetery and I am learning some interesting stories and even receiving photos. However, my in-laws showed up for a visit and they are staying through Thanks Giving, so I need to take a break for now and spend some time with them. I will be back to my project after they leave.

Until then Happy Hunting.

Posted by Untangled Family Roots at 5:47 PM No comments: Links to this post

I found that five of the 49 interned were infants and I suspect that another eight were infants as well, but I have no proof as yet.

Here is a list of the infants or still born buried at the Paupers Cemetery in Post Falls, Idaho.

Infant BOCK still born on 30 April 1939. I tried to find this child's family in the area, but I found no Bock family in the area. I did find many Bock families in and around Ada county down south. I wonder if the family was traveling through or just moving here when the child was born.

Linda Hazel (Baby) BURKE was still born on 7 April 1943. She appears to be the last burial at this cemetery.

Unfortunately we do not know where these children are buried in this cemetery, only that they were buried here according to records. Many of the graves were never marked from what has been found, and those that were only a few have with stood the test of time. You must keep in mind that this was a cemetery in use during The Great Depression and was rightfully known as the Pauper's Cemetery as those who were buried here could not afford burial, therefor the county buried them.

Margaret Ellen Taisey was a 15 year old girl who died after an accident, but I will do another post on her death at a later date.

The other eight that may have been children I will not list until I've done more research. I will also look further into possible families of these five children, but as of yet I don't know who their parents were. It will take a visit to the court house when I have time to go further, if I ever find time.
Posted by Untangled Family Roots at 12:05 PM No comments: Links to this post

A Face to the Name

Many times as we visit cemeteries and graves we rarely know what the person looked like unless they were a family member we knew, and even then, how good is our memory. I'm always so excited when someone shares a picture with me of an ancestor or in this case someone I am studying.

I finally received the photo of John E Davis from his granddaughter. After much trouble with sending it by e-mail we finally used Wal Mart's photo center to exchange the photo. 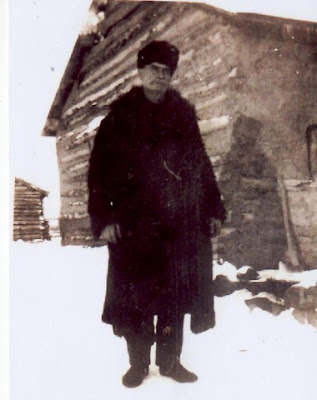 Finally for the first time we can see a face to a name at the Pauper's Cemetery in Post Falls, Kootenai County, Idaho. I don't know that I will get that lucky with any of the other 49 internments, so this is truly a treasure, thanks to his granddaughter.

She described him as a tall rugged man of very few words. I'm sure this photo was taken at his homestead in Alberta, Canada. He died at the age of 77 here in Idaho, but didn't move back to Idaho until the late 30's and died in 1941. He doesn't look like he is in his 70's in this photo, which leads me to believe this was taken in Canada.

There is still more to come on John. I am waiting for the homestead papers and some local history written about him to come from Alberta. I'll share what I find then.
Posted by Untangled Family Roots at 11:48 AM No comments: Links to this post