It's not bad enough that my Jerry Roe apparently joined up with a gypsy clan and decided to travel the countryside avoiding census takers and other forms of records, but now I've got to deal with people who chose to perpetuate trees of no substance and proof, instead of doing substantial research. Not every tree is perfect, we all make mistakes or wrong assumptions, I do all the time, but it's my own work and not copying someone else's tree. I correct those mistakes as soon as new information is found. Okay I'll stop ranting and get to my roadblock.

I've been able to trace my mother's Roe line back to Jothonan Jossiers Roe and Rachel Mason, married in 1883 in Livingston, MO. Beyond that I know nothing of Jerry other than that he was born in Iowa in 1859. I have documentation that Rachel Mason and her family was gypsies and a great deal more research on her line, but Jerry has been my roadblock. I also know that Rachel was enumerated with her family in 1880 in Minneapolis, Minnesota travels with a clan of gypsies, which was noted in the margin as such.
Then my mother did her DNA last year and since then I've been researching her Roe line. I've been able to connect her consistently through her DNA connections to Jeremiah Roe II, but I have yet to be able to find all of his children let alone find the connection between him and my gg grandfather Jerry Roe. I am certain that there is only one missing generation between them.
I have researched many of the Roe lines down from Jeremiah Roe I born in 1750 believed to be Ireland. I have eliminated many of the lines as possible connections to my Jerry. I have now with DNA and what lines are left narrowed my search to Jeremiah Roe II or his brother Johnathan Roe.
Johnathan is a possibility because I also have many DNA matches to Van Valkenburg which was his wife, Lucretia's maiden name, and I've not been able to rule out their sons Joel or Richard as possible fathers of my Jerry. I've sent off for information from historical societies related to the surname and areas where they lived. My DNA match to this family is a bit weaker than those of Jeremiah's descendants. So even though I can't rule out two of their sons as possible fathers of my Jerry, I'm beginning to think that I will eventually eliminate them.
Jeremiah Roe's descendants have very high and in a few cases extremely high DNA connection to my mother. I think where the paper trail breaks down is with the children that Jeremiah had with his first wife, Mary Jane Grove. All of the children were born in a very lacking in records time period and part of the country. Most if not all eight children were born in Fayette County, Ohio between 1810 and 1825. There is only one son that I have been able to confirm through records was a son of Jeremiah and Mary, which is Jeremiah Roe III. There are two girls that other cousins who do connect to us by DNA matches claim that are daughters, Katherin Mary (Kate) and Elizabeth Jane, I'm still working on finding records that confirm them. The other children are completely unknown to me. I have frustratingly found so many trees claiming names like, Perry, Margaret, Michael, Nancy, Joseph, John, and others with absolutely no proof other than a line of trees that have been copied.
I am hoping that someone out there knows something about Jeremiah and his first wife's eight children that are willing to help me plug in the last missing piece of the puzzle. I'm certain that the connection is with one of his boys of the eight children. By the was of the eight five, counting Jeremiah III, are boys and three are girls. This is all based on the 1820 and 1830 census information. Also from the 1830 census in comparison with 1820, it can be deduced that one of the boys may have died before 1830.
Sorry for the lengthy post, but I've done so much work on this and even though I'm closer I'm still missing something that is keeping me from connecting my Jerry to his ancestors. Any help would be greatly appreciated.
Posted by Untangled Family Roots at 3:24 PM No comments:

Can you imagine it? Few can even imagine living to be 100 years old, but Emily Lutitia (Scott) Hoard experience exactly that and she lived in two centuries at that. Can you imagine all that she saw and experienced in her lifetime?

Let me put her life into perspective. Emily was born 1 Sept 1848 in Metamora, Franklin, Indiana. Now let's think about that for a minute. She would have been 15 when the Civil War began. Knowing what I've learned about this side of my family I believe they were very loving and very likely against slavery. When she was a child slavery was still legal, travel was horse and wagon, the west was still being discovered!

In 1850 Emily is found in the census as a two-year-old living with her parents and her maternal grandmother in Center, Marion, IN. Next, we see the family in the Iowa state census for 1856 in Union, Lucas, IA. There are now two more family members; A.F who is 5 (Alexander) and M.E who is 2.

So far no more records have been found for any of the family members between 1856 and 1866 when Emily shows up on 12 Jul 1866 in Platte City, Platte, MO where she marries James W Hoard.  According to a deposition, Emily gave for her pension file they left for Jackson co., MO in 1868 and then back to Platte co., MO in the spring of 1869.

There are then no records found for George and Aner, or the boys, until 1880. In 1870 Emily and James are in Carroll, Platte, MO. It's very likely that George and Aner are in this part of Missouri at this time, just no records have been located. In 1870 census Emily and James have two boys; Thomas - 3 and George - 1. During this time period, she would have likely heard of many of the Indian wars that happened in and around the states she was living in. As much as I believe the US government wronged the Native Americans I can also understand the fear of Indian attacks that someone like my 3rd great grandmother would have felt. One of the saddest and most disturbing Indian battles was the Battle of Wounded Knee, which occurred on 29 Dec 1890. It's likely Emily and James would have been in NE or MO at that time. I would have loved to have known how this affected her. 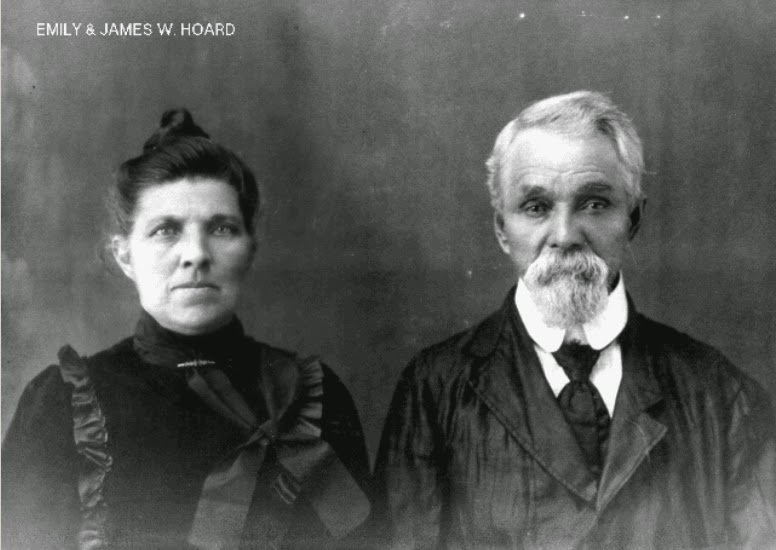 Emily would then live out the rest of her life in Kansas from 1900 until she dies in 1948. She lived in Harvey, Latham and Union, Kansas. In 1903 The Wright Brothers Make the First Flight at Kitty Hawk and the First Silent Movie, The Great Train Robbery comes out. I wonder if she would have seen it, or maybe her boys and their families? Her husband, James Hoard, died on the train to Arkansas to visit family on 14 Jun 1911. A year later The Titanic Sinks. She would have witnessed both World Wars and seen sons and grandsons go off to war. She must have been a woman with wonderful Karma because from what I've seen all of her sons and grandsons that would have served returned home to have families and live long lives. In many cases, her sons and daughters lived into their 80's and a couple of the daughters to 98. I'd say the longevity gene was strong in her family. 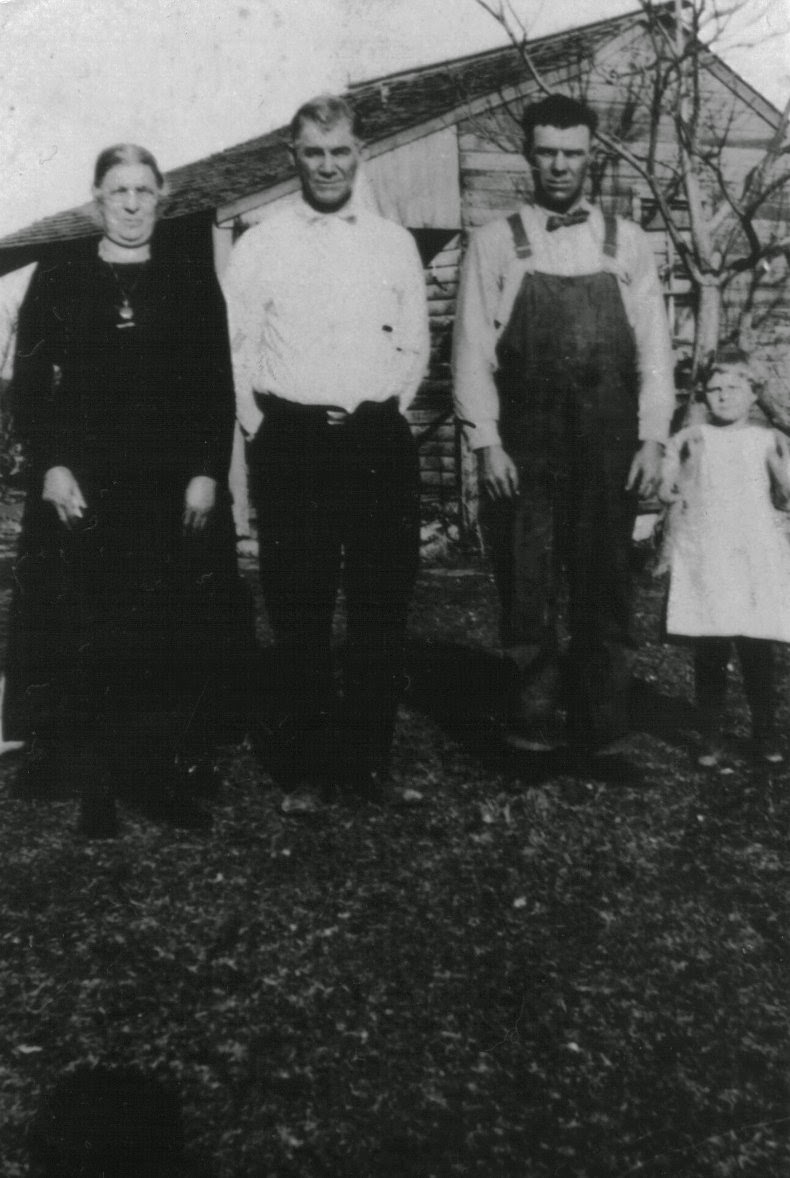 In the 1920's she would have seen the beginning of Prohibition in the U.S., The First Talking Movie, The Jazz Singer, and First Mickey Mouse Cartoon. In 1920 she is living alone at the age of 71 in Union, Butler, KS. In 1929 the Great Depression began. I do not know where she was in 1930 after the Depression began. I can only imagine that she must be living with one of her children at this point, but my 1940 she is once again living along in Latham, Butler, KS. Though Roy is living nearby it is still amazing that a 91-year-old woman is living on her own. In 1934 she would have been in the midst of The Dust Bowl and yet she stayed. The Hoard family was not one easily driven out of the Great Plains.

I've often been asked if I could go back in time and spend time with one ancestor, who would it be? Emily would be one such ancestor. I can only imagine the stories that she could have told. Nearly 100 years of life spanning the most volatile, industrious, changing, progressing two centuries in American history.

Emily died, just shy of her 100th birthday on 28 Mar 1948 in Wichita, Sedgwick, KS. She was then laid to rest beside her husband, James in the Latham Cemetery in Latham, KS.