For those who follow my blog you'll notice that I've not been around much over the last year. It's all been for a few good reasons. One I finished my queen sized Native American themed Lone Star quilt for my bed, but that's off the subject. The rest of my time has been in studying and write a book about my Jenkins line.

My grandmother, Olivia Joyce (Jenkins) Woolsey was the daughter of John Hugh and Leota (Morton) Jenkins. John Hugh Jenkins was the son of John Stephen and Olive (Swofford) Jenkins and John Stephens Jenkins was the son of Micheal Oliver and Mary Ann (Freshour) Jenkins. There is where my colossal brick wall began several years ago. That was until a lovely lady named Betty Ann Roach found me. 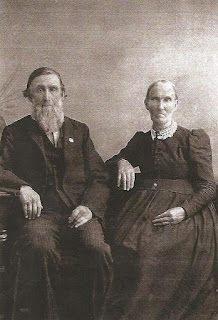 I had began to put together a digital scrap book thinking, "Well this is as far as I'll get on my Jenkins line." Now we all know that given enough time and hard work, brick wall eventually crumble. Only this one I saw as granite. I had been told many time that no one knew who the parents of MO Jenkins were, and to this day I still don't know for sure, because it had always been known that he was as illigetemate child. However that doesn't mean you can't skip to the next generation if you know, from his account, who his Aunt and Grandfather were. This is where Betty came into the picture. She had wrote me about the works of Jewel Dial, a grandaughter of MO Jenkins who interviewed him personally! Now what a treasure! If it weren't for Jewel then my wall would most certainly have been made of granite, but today it is a pile of rubble!

According to Jewel's interview notes MO accounted that he had been raised by his Aunt Fronburger whose father (his grandfather) was Joseph Jenkins. This family actually wan't very hard to research. Thanks to the extrordinary efforts of Familysearch.org and the records of Lincoln County, NC. Using Wills, Probates, Land records and census records I was able to piece together the Jenkins family.

Margaret Jenkins the daughter of Joseph Jenkins did marry William Froneberger 7 March 1820. She was nursing her daughter Barbara at the same time that MO was born, so she was able to take on the care of MO as well. Once this connection was established, which matched with the details in MO's interview, the flood gates opened.

Most records I could find on this family were found on the Family Search website. Betty had sent me a copy that she already had of Margert's brother's (Hugh) will. Though this record can also be found in the Lincoln County wills on the Family Search website. Most of the records were not indexed, so I had to search them individually until I found who I was looking for. It was time consuming, but well worth it.

Here is the lesson I learned, never assume that all records on a genealogy data base site are indexed or that only the ones indexed are available for online viewing. I began looking through the catalog list for Lincoln County, NC when I notice something I had not noticed and certainly not taken advantage of before. In the list some records indicated they were online and no longer gave a film number. So I clicked on the link for North Carolina Probates and found that I could browse the records. Eventually I found probate, estate files and or wills for David and Hugh, both brothers of Margaret, Joseph, their father, Hugh and Steward, brother's who turned out to be cousins of Joseph, Aaron, brother of Joseph and Hugh Jenkins, the father of Joseph. From these records and support by census records I was able to compile two more generations back from my MO Jenkins. Now that I know the family came from Lancaster, PA guess where I'll start my research next. Though from what I've seen there doesn't seem to be the abundance of records that I had found with Lincoln, NC for Lancaster, PA. At this point I've decided not to finish writing my book until I can find more about Hugh Jenkins' family in Pennsylvania.


1. HUGH1 JENKINS was born in 1722 in Lancaster County, Pennsylvania. He died in Nov 1800 in
Rowan County, NC. He married (1) MARY MASON KENT. She was born in 1739.
Hugh Jenkins and Mary Mason Kent had the following children:

Oh I'm working so feverishly on the book for the Jenkins Family Reunion, but at this point I fear that I won't complete it in time. I have stumbled across more Jenkins family members in Lincoln County, NC around 1800 that I want to study and add to the book.

On the other hand the book is getting so large with photos and the Lincoln County, NC Jenkins stories that I'm thinking a sequel to the first book may be an order. So I think I may find a breaking point for this first book, wrap it up and send it off to the printers. Then after more studies in the future I'll look at writing a second book to follow.

I wished I could be there with all of you at the family reunion. It's just not affordable this year. Maybe next time.

A big thanks goes out to Sharron, Betty, Kate and Evelynn for their contributions and helping me to make this book possible. I could not have done it with out you ladies.
Posted by Untangled Family Roots at 4:24 PM No comments: