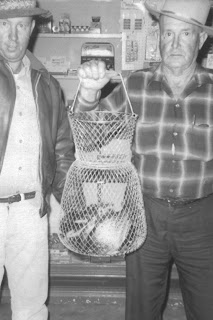 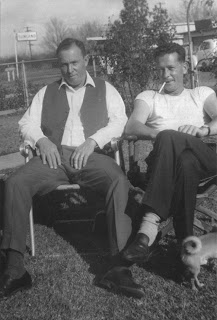 Well, those of you with more experience at this than me will probably laugh.
I wanted to find out a bit more about my grandfather, Von Joseph "Rusty" Roe. Here is what I did know about him. He was born 10 Oct 1924 in Cement, OK.
Photos: (Left photo) Rusty and father Frank to right after a fishing trip. They both loved fishing with a passion. (Right photo) left is his brother Jimmy and Rusty.
In 1930 I did find him in the census with his parents Frank and May and siblings, Rachel, Hazel, Clearance (Charlie), James (Jimmy) living in Oklahoma County, OK. According to family tradition Frank packed up the children and moved them to California sometime after that. May supposedly was away taking care of a sister who was ill. Now she showed up years later in California, she died in San Fransisco, but her and Frank were never together again. Frank went on to have seven wives total before he died in 1971 in Modesto, CA.
Rusty (Grandpa) was suppose to have served in the army in WWII according to the family. I have yet to find a WWII registration for him. I don't know if maybe he enlisted before the war or what.
The next event in his life was when he married my grandma, Mary Ellen Hayes on 23 Apr 1947 in Reno, NV (they were still living in Stanislaus County, CA though). Then later in his life his other wife, Velma, showed up wanting him to support her daughter. According to family He married Velma before he knew grandma. She had a boyfriend who she took off with. Grandpa had known she was pregnant when she left, but never believed the child was his. He had never officially divorced her because he could never find her. So when she showed up in his life again he divorced her and then legally went back to Reno and remarried grandma on 23 April 1967. Grandma and Grandpa finally had their twin daughters almost 10 years after they were married, it took grandma a long time to get pregnant. Then a few years later one more baby girl.
They lived out the rest of their lived in Modesto, CA. Grandpa spent some time in a VA hospital somewhere in southern CA. He was dying of cancer. He finally lost that fight on 3 Mar 1976. Two weeks later I would celebrate my second birthday, so as you can imagine I have no memories of him other than the family stories. He was buried in Modesto, CA beside his father Frank.
I had sent off for his WWII records. I got a notice back yesterday that they couldn't find any records most likely because of the fire of 1973 that destroyed the WWII records. Now what do I do? They sent a questionnaire to gain more information in order to locate other records about him. But there is so much I can't fill in. It is asking a lot about whether he sought treatment at a VA hospital, where and when. So I guess my only hope is if I can get information from my aunt and they can find his medical records. But I'm also baffled as to why I can't find any record of him registering for WWII. We know he was a veteran and that he received treatment at a VA hospital, but why can't I find his registration?
If any of my genealogy pals have ideas and suggestions to help me find his military records, please help!
Posted by Untangled Family Roots at 1:09 PM

VA Hospital in Southern California: There's a big medical center in Westwood, near UCLA (University of CA, Los Angeles). Don't know if that's where he was. But Here is a link to the Greater LA VA. It might be of help.