I grew up in a very special home. My parents bought the home on 130 Glenn Ave in Modesto, CA from my Grandmother, Mary Ellen Roe. I was four years old. My Grandfather, Von Joseph "Rusty" Roe had recently passed away, and Grandma wanted to sale the home. She bought a smaller home one street behind us.

My Grandparents, Mary and Rusty Roe had bought the home when my mother and her twin were about five years old, so this would have been about 1960. My Woolsey Grandparents lived in the home behind us that faced the alley at 130 1/2 Glenn Ave. I was fortunate to live so near both sets of grandparents and be so surrounded by their love.

The home set on a lot and a half, probably 1/2 acre or so. When I was about 12 my parents stuccoed the home, it was blue and remained that way until they sold it. They had friends in the church as well as my uncle who were plasterers. I can still see all the people working on our home who helped to finish it in a very short time. My mom and all the women would set up big tables with food for everyone. All of us kids would entertain our selves with all kinds of games in the yard, as long as we stayed away from the scaffolding. Later my dad put a new roof on the home as well as Grandma Woolsey home behind us. I'll still never forget the mishaps he had on her home. He went straight through the roof into a back bedroom for one and then the back porch broke away and fell with him. I'd say Grandma's home was in desperate need of repair.

Our home had three bedrooms and one bath. We didn't have the luxury of two of three bathrooms for everyone. We had to learn to share. It had the beautiful detail of the inset ceiling design, rounded corners, plastered walls, and a huge kitchen. The kitchen was as big as the family room. With cabinets filling two walls, the stove, refrigerator, and dishwasher taking up three other nooks in the kitchen. I remember wall papering the kitchen with my mother and painting the cabinets and stenciling little designs on them. When I was pretty young my parents converted the garage into a den with a cozy wood stove. I can still smell the firewood burning and the popcorn popping. We would come home after church on cold nights (well California cold anyway. Today I'd say that's nothing after living here in the snow of Idaho), start a fire in the wood stove, pop popcorn and make a batch of tea to drink with it. Set around a watch the fire as we visited. Remember all the years I grew up in that home until I was 16 I never had a TV to watch with my family, so we really did talk.

This is my mother in the middle, her twin to the right and my Dad's sister on the left. This shows the stencle work she did on the cabinets. 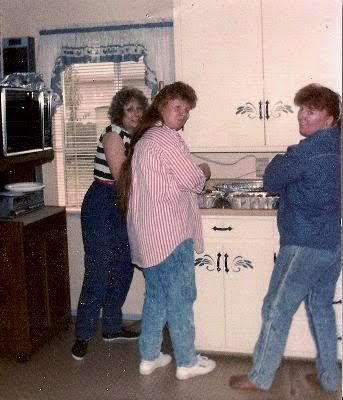 I had a huge yard to grow up in and my mother made the best use of it she possibly could. You would have thought that I lived on a five acre farm the way she used that 1/2 acre. The only animals we didn't have there was our horse, and then any time we raised a calf or pig to butcher. They were kept elsewhere. But we did raise, chickens, rabbits, turkeys, ducks, goats and even my FFA lamb on that 1/2 acre. We always had fruit trees; apple, pear, fig, cherry, lemon, pomegranate and more. We had vegetable gardens and even mom's beautiful rose and iris gardens, and I don't mean just little flower beds. They were huge gardens!

My dearest memory was a cool day in October 1993. James (my later to be husband) and I were sitting out by the fish pond. I believe my grandfather was the one who built that fish pond, but I'm not sure. It was made out of cement blocks and plaster. It was always green from the algae, but we would all get in there every now and then and clean it out together. At one end of it was a very tall palm tree and if you would look toward the street from there you would see another one straight ahead in the front yard. Anyway I was sitting between James' legs and he had his arms wrapped around me. We were just talking and sharing our dreams when he quietly and tentatively asked me if I would marry him. We had already been together for nine months and I already knew he was the one. We were still in high school, but I didn't hesitate. I said yes. I still finished high school before we got married a year later. Actually my parents didn't really accept it at first and he didn't have a ring for me until November of 1993, when we made the engagement official. But to me it was that cool October day when he proposed that stays in my mind. Probably because it was so unexpected and I know unplanned on his part, but truly from the heart.

I had many great memories growing up in that home, and I know my parents did as well. My parents first rented the home to my husband and I for a while when they moved up here to Idaho, and then to her twin sister and her family when my husband and I moved up here in 1997. When Grandma Woolsey passed away, my mom's twin was also ready to move out of the family home to be closer to her children, so my parents put both homes on the market. This was back when the market was booming in 2001. They made a killing on both homes. I will always miss that home, but I will no longer miss the neighborhood. When I was growing up there we were surrounded by the old families that had lived there for generations. Today almost none of them are left and the old part of town has gone to hell in a hand basket. It's not an ideal part of town to live in any more. It's also known as South Modesto.
Posted by Untangled Family Roots at 10:04 AM