Route of the Hiawatha

We took a bike ride in the mountains today. Now when we took off on this trip I was very apprehensive. I haven't had my bike out of the basement to ride in probably more than five years. I have enough trouble staying upright on my bike on level ground, and yet my husband thought that I would be just fine going down hill for 15 miles at a 2% grade. Okay so I hate to admit it, but he was right. I did just fine the whole day, and enjoyed myself the whole time.

The Route of the Hiawatha is full of history. It was once the Pacific extension of the Chicago, Milwaukee and St. Paul rail road line through the Bitterroot Mountains between Montana and Idaho. The old towns that once dotted the landscape along the rails are long since gone. Today it has been returned to the wilderness, except for the path that winds through Idaho from the Montana border near Roland to Pearson, Idaho. The old Rail Road tracks were removed and the path was made into a trail for bikers and hikers. The route includes seven high steel trestles and ten tunnels. All along the trail there are interpretive signs that tell of the history of this area.

Many nationalities were hired and worked on building the rail road from 1906-1911. The rail road used millions of workers at a cost of $260 million. The Milwaukee road finally went bankrupt in 1977 after many workers proudly kept her running for decades.

The Taft Tunnel was built from both the Idaho and Montana side at the same time. When it came together they were only a couple inches off. It is a very dark and wet 1.7 mile tunnel. I choose to walk instead of ride my bike when starting out in this tunnel at the beginning. When we went back through I dared to ride about half way before I again got off and walked again. It is very easy to get disoriented. It's very hard to see. The bike lights almost aren't enough to help you see. Not to mention it's in the 40's and very wet through the tunnel.

The most dominate historical event of this area would be the 1910 fire. It devastated over three million acres through Idaho and Montana on August 20 and 21st. It killed 86 people, one of whom was from this rail road. I'll show the marker of that grave later. 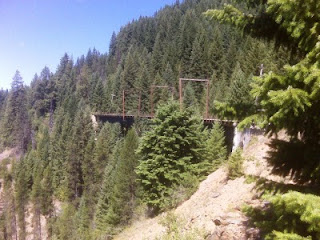 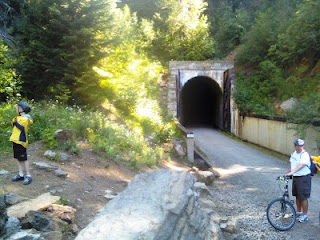 Left: One of the many trestles. Right: The Idaho side of the Taft Tunnel entrance. 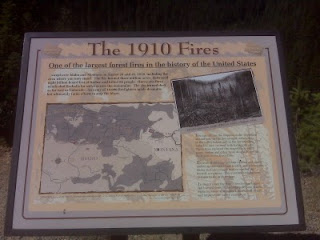 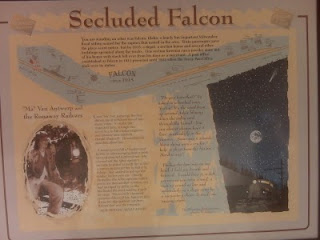 Along the path are many interpretive signs. On the left speaks of the 1910 Fire, on the right is a funny account remembered by a rail road worker about one of it's more colorful characters Cora "Ma" Van Antwerp. She was the first station agent at Falcon. 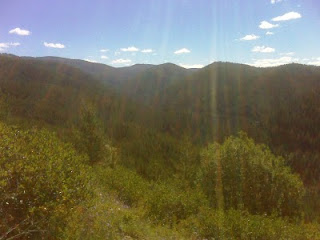 One of the many beautiful views from the trail. 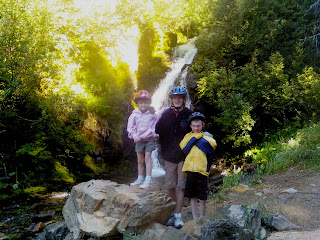 Left: My three angles (at least sometimes;-) just outside the Taft Tunnel in front of the beautiful waterfall. Right: Justin entertaining a chipmunk who came up to his hand thinking he was offering food, only to run away disappointed. The chipmunks were all over, begging and entertaining very well for their food.
Posted by Untangled Family Roots at 7:28 PM

Email ThisBlogThis!Share to TwitterShare to FacebookShare to Pinterest
Labels: Idaho history, Montana, Route of the Hiawatha