In the last three weeks we’ve introduced you to JAMES VIATOR HAWKINS (1874-1940) Part I and Part II and William Stark Hawkins (1910-1971) Part III. Now it’s time for the final chapter for William Stark Hawkins and the best part. Williams Stark Hawkins was a District Judge and attorney in Kootenai County, but more important to the history of Robert R. Romero, Attorney at Law, PLLC was William’s connection to the home at 627 N. Government across from the courthouse that would later become the law firm of Brown, Justh, and Romero.

William S. Stark was an attorney, Judge, family man, and community member. I’m sure many who encountered him could tell many stories about Bill, but here are some more that we know about. 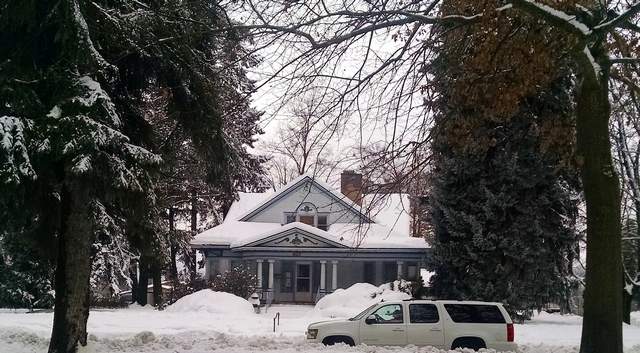 HISTORIC BUILDING UP FOR GRABS
Read more about the current state and battle for this beautiful pieces of history, once the home of William and Agnes Hawkins

Bill promptly replied, “no, Judge hear me out.” Judge Featherstone again attempted to stop Mr. Hawkins and again Mr. Hawkins replied with an exasperated “no” because he was on a roll and so passionately trying to argue his case!

Finally realizing the severity of the situation, Judge Featherstone blurted out, “Mr. Hawkins! Will you stop and turn around and see why I’ve been trying to get your attention!” One can only imagine the shock when Mr. Hawkins witnessed flames shooting out of the upstairs bedroom of his home.

As it turns out little Jimmy was playing with matches and lit the curtains on fire in his bedroom.

One cannot cruise the newspaper for long before it becomes abundantly clear that the Elk’s Lodge was a huge part of Bill’s life. James V Hawkins, Bill’s father had been a charter member and the exalted ruler in 1913-14 of the Coeur d’Alene lodge 1254. Bill Hawkins would also be a part of the Elks throughout his adult life, quite literally until the day he died. He was the exalted ruler from 1935-37. 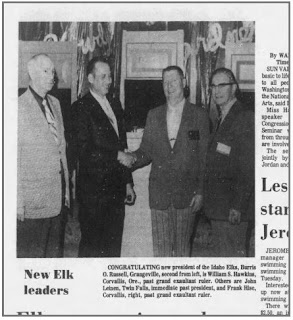 Bill was also involved in the Masonic Lodge, Shriners, and the Coeur d’Alene Eagles. Bill was also an active member of the Democratic party, often speaking for the party and hosting events for the party. The Hawkins believed in community service and gave back where ever they could.

Agnes was also heavily involved in the community. She was the Jr. Choir Director for their church. She provided music to community social events such as the Sons of the American Revolution, who her husband was a member of.

One membership that Bill was a part of extends all the way back to The Revolution. Bill’s ancestor was Marshal Dixon. This is one membership that is handed down from generation to generation and each member holds proudly to the knowledge that their ancestors played a role, no matter how small, in the creation of this great nation, The United States of America. This heritage came to him through his grandmother Ora Stark, which is where his middle name comes from. She was the daughter of John Wesley Stark, the son of William Halstead Stark, the son of Elizabeth Dixon, the daughter of the Revolutionary soldier, Marshal Dixon. 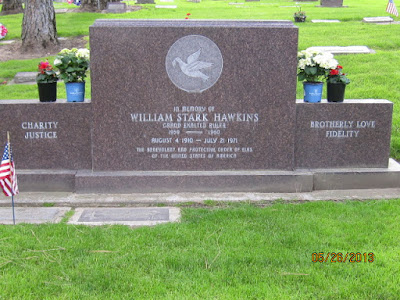 Bill died in New Orleans, LA while attending a Nation Elks Convention on 21 July 1971. He was buried in the Forest Cemetery in Coeur d’Alene, Idaho.
Posted by Untangled Family Roots at 2:00 PM