Tombston Tuesday: A Grave in the Wilderness 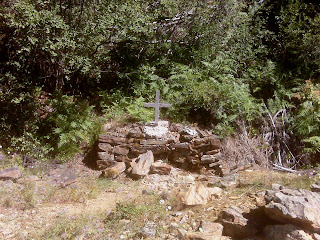 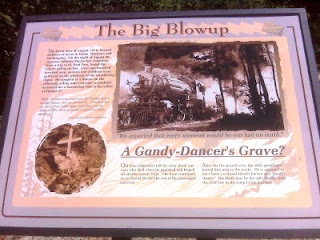 On Saturday my family and I took a bike ride on the Route of the Hiawatha. On August 20th and 21st of 1910 this area was devastated by fire. It killed 86 people and burned millions of acres of Montana and Idaho forests. From 1906-1911 the Pacific extension of the Chicago, Milwaukee and St Paul was being built through here. When the fire hit the area those that were working on the railroad jumped into rail cars and rode them to the safety of the tunnels.

In this case a man on one rail car panicked and jumped from the car, and died. The train continued to tunnel 20 where the rest of the passenger survived. Later the railroad workers went back and buried his body beside the rail, where a cross still marks the spot today. His name is unknown, but he was believed to be one of the railroad workers known as a "gandy dancers."
Posted by Untangled Family Roots at 8:33 AM

Email ThisBlogThis!Share to TwitterShare to FacebookShare to Pinterest
Labels: Fire of 1910, grave, Idaho history, Montana, Route of the Hiawatha